Listening to Froskull may not be an easy feat, for those of you who want their peanut butter and jelly on separate slices… 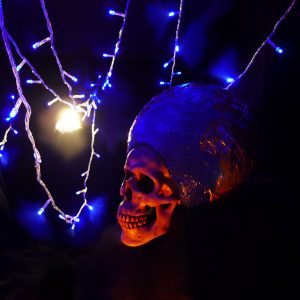 On the other hand, if your musical choices go beyond easy listening, and if you are looking for something that is as interesting and as compelling like the Milky Way, then you have reached the right planet.

The Nashville original; composer, musician and producer Stephen Hammond is the mind (and skull) behind all of it, as he conjures up the bending wizardry that compiles all -possibly known Rock oriented- genre you can find in a deviously drafted and produced album (of the same name)

It should sufficiently entice any music lover’s interest: I have found the traces of Enigma to Metallica and Priest to Crow on just one track (The road to Sto-Vo-Kor) which was enough to draw implicit attention from me.

(If only they had added a flute player I would have added Jethro tull in the list, especially with the sir name Hammond of the founding member)

Reportedly, Stephen Hammond has been producing professional music (putting out music albums) ever since 2008, afterwards; he add bassist Jason Schond, his brother Brett Hammond on guitars, and Adam Dennis on drums (in the respective order). The actual band (with the name Froskull and current line up) settled in 2012.

All of the musicians in the lineup are equally polished; exploring wild eccentric pan-genre compositions, laden with intricate beats and timings, trickily infused bass lines, topped with searing guitar solos and plenty of meat in terms of riffs!

The four piece band has enough zeal and skills to seriously equate with a 24 piece orchestra.

The phrase ‘Flight of the imagination’ is ringing through my head, as I have just finished listening to the Froskull playlist, a 4th time in a row.